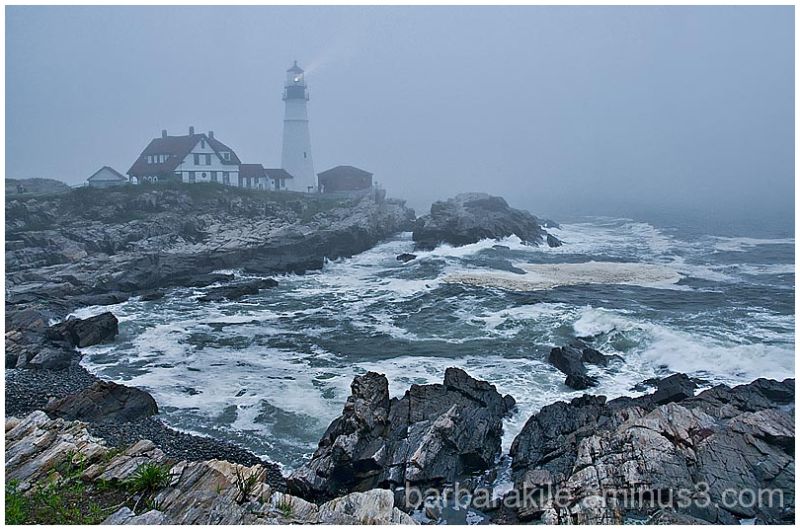 Posted by Barbara Kile (Ft. Worth, United States) on 24 September 2009 in Landscape & Rural and Portfolio.

Well, sorry if you expected flowers, but I do photograph other stuff too! :-)

I captured this image following a photo tour to Maine. I had driven back to Portland, ME to prepare for my trip home and wanted to head back to the Portland Lighthouse for what was shaping up to be a good sunset. It was partly cloudy and I was getting excited as to what I might be able to capture. When I arrived at the lighthouse, it was socked in with fog.

I recovered from my shock and had to switch gears and decide how I would capture the scenario. The fog had actually begun to dissipate some, so I quickly set up my tripod, composed the shot, and waited until I had an angle of the lighthouse light stretching into the fog. I remember the sounds too: the fog horns were intermittently blasting and there was a loud 'sucking' type sound as the ocean churned and the waves hit the rocks. Those were new sounds to me!

I was the only one on the photo tour with a foggy lighthouse shot, because I took the time to go back out to the lighthouse one more time on my own before I headed home. We had plenty of rain and clouds on the trip, but no fog like this.

What a change of theme :) I like this photo as it captures amazing seascape with great mood. With your description of sounds one can clearly imagine standing there instead of you. Perfectly composed, very well timed for catching the light beam. Maine and it's surrounding must be wonderful place from what I saw and read. And one of my popular writers live there, guess who, yes, yes, Stephen King :)

Eldiablo from over the rainbow, Monaco

I think this is a wonderful shot! The way the light shines from the lighthouse..
And the waves look great!!

a wonderful shot! I love the stormy/gothic feel this has...

And capture it you did! It is an amazing shot! I hope you printed and framed. You have such a great eye for detail.

Very well done! You captured the light from the lighthouse perfectly. I think I prefer this to sun, blue sky and fluffy clouds... or even a sunset. Bravo!

A fine foggy lighthouse shot it is! I like how you waited to get the lighthouse's beam just right. Wonderful atmosphere which gives the picture such depth. Excellent.

Spectacular and well done image. Right out of a lighthouse calendar!

This is a fantastic image! Congratulations. Thank you for sharing the story of how you made it. It reminds me of a personal photographic idiosyncrasy I've noticed. For example, if you should ask me what I had for lunch yesterday, I would REALLY struggle to remember; but if you should ask me to tell about an image I made ten years ago, I can recall all sorts of detail about its creation. Personally, I love that about photography.

@Bill Laing: It's that special relationship we have with our subject perhaps? Thanks so much, Bill!

Great shot, really shows the ruggedness of the shoreline and the power of the ocean...so sad about the missed sunset but this is better!

A wonderful composition and a great misty atmosphere. Like the grey tonality.

awesome shot, love the feel and the colors

This looks like Portland Head Lighthouse. Excellent capture; I like how you captured the lantern light in the fog. A beautiful composition!

@LCImagery: Yes, it is Portland Head Lighthouse. A fun place to shoot! Thanks so much!

An excellent shot of the light house and fog. Good timing on the beam of light.

Barbara: This is just wonderful. I can feel those waves lifting to crash onto the rocks. The composition is just right. The colors marvelous. You did great going back and getting this marvelous foggy image.

Great shot! Beautiful composition.. I love that u capture the light of the Lighthouse.Thank you.

Truly breathtaking!! Love that light coming from the lighthouse. Beautiful!! : )

I love shooting in ME. And this is a perfect example why!

Wonderful Barbara! This reminds me of my summers in Maine when I was a child. I can still smell the ocean and the coolness of the morning air. Stunning.

This is an awesome composition! The light shining through the fog is a great capture! Awesome work and thanks for driving back!

This is just fantastic. Anything else I'd say is just a repeat of that so I'll just enjoy the photo instead.

WOW!!! This is amazing!!! I love the lighting and tones. Very well captured. Bravo

Thanks everyone for stopping by to comment and sharing my 'foggy moment!'

@Double KK Photography: Appreciate it, thanks!

This is just...perfect! The fog makes this shot and your patience in waiting for the light to shine out through the fog paid off. Such a hauntingly beautiful photograph. Sorry you missed your clear sunset but I think you got the better deal with the mist and fog! :)

@Claudia: Yeah, sometimes 'plan B' works out better! Thanks!

@empar bessó: Thanks so much!

What a picture!! I have no words, is just superb, five stars for me!! It was not easy to take this picture, you had to go there twice but viewing this amazing picture I'm sure it was worth it!!

@David Nos: Yes, it was a neat experience for me - the view and the sounds! Thanks so much!