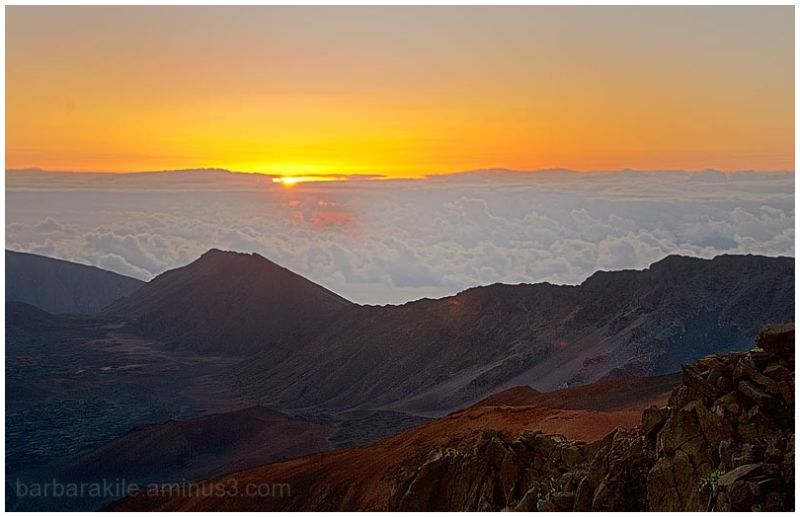 Posted by Barbara Kile (Ft. Worth, United States) on 11 March 2010 in Landscape & Rural and Portfolio.

As the emphasis shifts to the sky from the landscape, challenges arise as one tries to capture this range of light. I took several exposures and chose not to use Photomatix Details Enhancer - which did not render the image as I wanted. I used Exposure Fusion - with conservative adjustments and pretty much finished the image with Nik's Viveza2. Man, I love Viveza2!

This was a challenge to capture and I didn't dare to capture the sun at a higher position as this, as the landscape would have been rendered totally dark. This position of the sun left me with some options for a fairly 'natural' look, with the contrast of the 'cool' shadows and their colors and the 'warm' colors of the sky.

I love the color captured in the clouds, but not nearly to the extent of the post-sunrise image, where the color bathes the entire cloud cover. Next: the warm light bathes the landscape and cloudscape.

Yes, a challenging shot and you met the challenge beautifully !!! Bravo.

WOW, Beautiful colors n its not overdone like some of sunrises i saw. This was what i shud bahe done, I shud have taken shots from the opposite side of the crater.

You are still tempting us and persuading us how beautiful it was to be there :) Another great shot. It must have been simply awesome to stand there and watch the sun rise. It gives an impression that you are on the same elevation level as the sun. Btw, one minor nit - it seems that you over sharpened the image which caused the white line bordering the mountains. Nothing dramatic but noticeable.

A magnificent point of view for a photo beautiful and evocative

Beautiful! It's such a treat to be above the clouds and you've captured it quite well.

this is beautiful....seems to me, shooting a multiple exposure hdr type thing would have taken care of shooting when the sun got higher......something to think about, no?

@Susan: Thanks, Susan. I shot several exposures and Details Enhancer didn't render the image to my liking. (Happens occasionally) So, I used Exposure Fusion, also by Photomatix. I had 9 images and even ran some through Camera Raw a 2nd time to tweak exposures and ended up using 5 images I think. Once the sun emerges, you've got probably 9-10 stops of light. The histogram for the sun is still slightly clipped for highlights, although most wouldn't notice. I tried to keep the shadows as they naturally existed, but just opened them up with Viveza2 instead. :-)

Superb. You have the best tools :))

Very nice treatment of a very difficult dynamic range. Have you used split-neutral density filters in your photography? I've learned that the sun in Hawaii tends to have a brilliance at sunrise that requires the use of both hard split and reverse split NDs. For whatever reason, the sunsets present less of a problem. Enjoying your series on Haleakala very much ... and your website carries excellent images!

@Dwight Morita: Thank you, Dwight! Yeah, call me crazy - I used to use the split grads - but for the limited landscapes I shoot, opt for multiple exposures. I do landscapes mostly when I travel - and limit my filters to 3 Singh Rays, the grad not being one of those. (feel the 'purists' cringe!) lol I should have gotten your advice BEFORE going to the islands!

i love this perfectly captured image... and it is so interesting to see the sunlight on the foreground objects. :)

lovely composition and the final light and details have come out very well balanced with a natural look and feel! i like the layered look of this scene - very nicely captured and processed!

And there it is! (Now I am singing "Here Comes the Sun") Wonderful job, and thanks for letting us know what your thought were as you were shooting, it is great to learn!

As soon I as saw this I though "Haleakala". I remember getting up soooo early, driving up in the dark, and thinking that I didn't go to Hawaii to freeze. And then there it was! Lovely shot of this special place. Mine was back in film days, and not very exciting photos. Well done!

@B. Thomas: Cool that you've been there too! Yes, it was cold. Thankfully, the wind was not blowing or we would have frozen! Thanks Barbara for stopping by!

You lost a layer [teasing]. This is stunning Barbara. You are a superb landscape photographer! You really do know how to compose!

@Self-Indulgence: Thanks for the compliment - I do more flowers than landscapes. :-)

Barbara, I love the color of the sun coming up over the clouds. You must have been at altitude. Do you ever use a GND for this type of shot?

@Julie Brown: Thanks, Julie. I only do landscapes when traveling - and just end up doing multiple exposures. I would be interested to see how 5 stops of GND would compare to this. I don't know, but just curious!

I'm enjoying this series! Indeed a superb shot with the tricky lighting.

Beautiful scene. I love the distinct layers of color and texture.

For this image did you combine 5 exposures? What software do you use?
I just got a Singh-Ray 3-stop soft edge GND recommended by Don Smith. I haven't tried it yet but will be using it during his Big Sur Workshop at the end of the month.

@Julie Brown: Hi, Julie: I use Photomatix, & that program provides several ways to 'tonemap' the image. For this one, Exposure Fusion worked the best, but I still kept the results on the conservative side. Yeah, if I was going to use a grad again, I'd get a 3-stop, but this scene would have taken a 2 stop & a 3 stop. (I use Singh Ray filters: polarizer, vari-ND, and a Soft Ray.) With the 3 stop, you could come closer, but still take at least 3 exposures and blend them - as long as you don't touch either end of the histogram. When I take lots of multiple exposures of a scene like this, I do it manually and look at the histogram after each shot. You can shoot 1 stop differences, but people feel perhaps 2 stops between shots is best. If it takes 9 shots at one stop apart, so be it! I take a picture of my hand held up in front of the lens between a series of shots so I can tell later what images go together. :-)

You've achieved an excellent processing here Barbara, using filters at their best. Colors and lights are enhanced without beeing distorted... as a result, it really creates a nice and natural setting. Bravo.

Such a feeling of suspense...the expectation in the air and the <world stood still> feeling are very well captured...

Thanks for explaining your process, Barbara. This gives me more to think about as I will be trying out my GND filter during Don Smith's Big Sur workshop at the end of the month.